All posts by: "admin"

The Inn on Whitworth has been nominated by Mississippi Magazine readers for Best of ballot…..

Winners will be revealed in our September/October issue of Mississippi Magazine!

To learn how you can vote for us, click the link below!

Brookhaven’s Small Business of the Month

The Inn on Whitworth, owners, and staff were honored this morning by the Brookhaven-Lincoln County Chamber of Commerce. A panel of Chamber members and Chamber Ambassadors chose the Inn on Whitworth for the award, and presented us with a plaque in a ceremony in the lobby.

The Inn on Whitworth has been in business for over 2 years now, and, as owner John Lynch mentioned during the ceremony, it takes a community. Success comes not just from the hard work of the owners and staff, but the loyalty of our guests who have written stellar reviews across social media, recommended us to their friends, family, and co-workers, and come back to stay with us time and again. We feel blessed beyond measure, not only for the honor we have received today, but also for ALL those who have helped to make the Inn on Whitworth the best place to stay in Brookhaven. 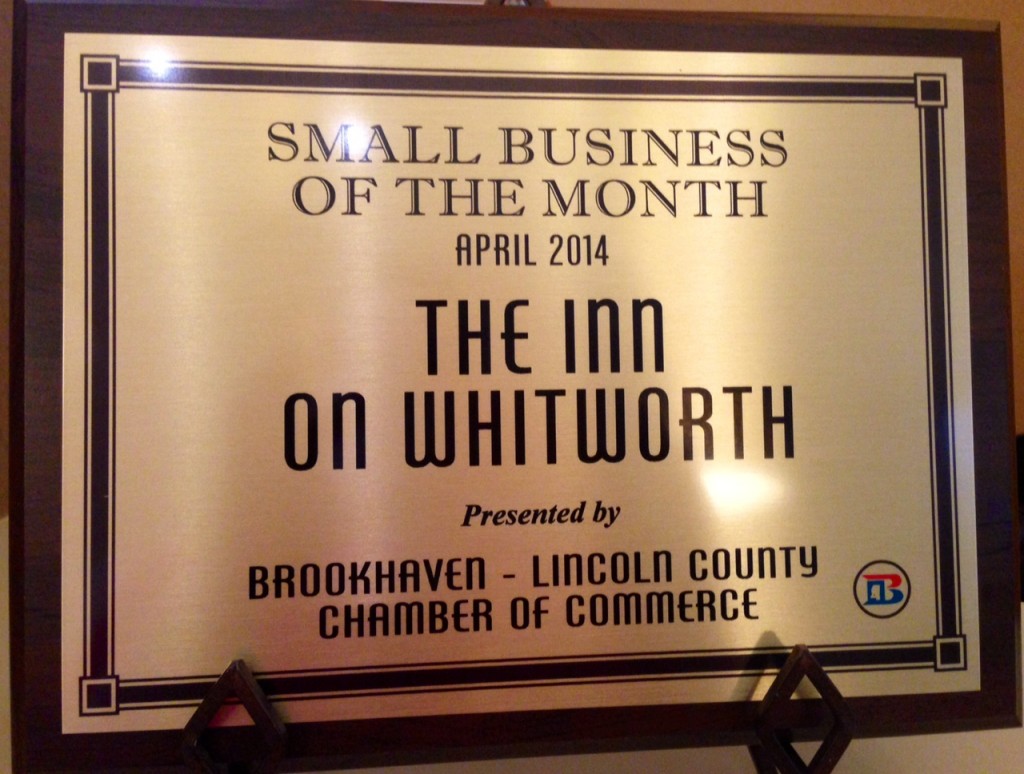 Helen and I were just thinking about different ideas that The Inn on Whitworth might be used in the future.  We were brain storming together and think we came across something special.

Here is the plan for someone that might live in Jackson and wants to have a different birthday party for a small group of friends….

Special memories for sure… Come see us in Brookhaven… We call it The Homeseekers Paradise.

We had a very nice article written about The Inn on Whitworth today from the Bluffs and Bayous magazine. We are featured on pages 44 -45 in the January wedding edition.

Hey folks,  Just wanted to make sure that all you out of towners stop by The Inn on Whitworth and check out the newest lodging experience in Brookhaven.  We are a small seven room boutique hotel in Historic Downtown Brookhaven.

Local artist, Dr Kim Sessums has original artwork all around.. You really won’t believe that this hotel is located in our small town. This Brookhaven Mississippi hotel is just right for your weekend stay.

Developer Johnny Lynch and other investors were all smiles Tuesday when they opened the doors to the newest addition to a reviving downtown residential sector.

The Inn on Whitworth hosted an open house for the public that left Lynch beaming with pride and excitement as he greeted guests who themselves had nothing but excitement in return for the new hotel/apartment hybrid.

“This is a really good crowd here,” Lynch said after the doors opened at 4 p.m. “We’re all excited about it so far. We’re giving away three free nights at the hotel, and lots of people are signing up.”

Hundreds of people filtered in and out to admire the modern facelift to the historic building originally constructed in the early 1900s.

“We love it,” said Karron Smith, of Pat Lowery & Associates, as she and a couple of co-workers admired one of the apartments on the upstairs level.

“Everything is so unique.””I just love the architecture altogether,” added Karrie Case, also from Pat Lowery. Case and Smith exemplified the sentiments of those gathered to revel at the building’s completed renovations, which began back in the spring of this year. While the open house was not the official grand opening, Lynch said renters for the upstairs apartment level are moved in, including the Inn’s innkeeper Diana Roberson.

“I’m excited about it,” Roberson said. “I’m looking forward to being able to work downstairs and live upstairs in such a nice building.”Hotel rooms have also been booked.

“We had our first paying customer (Monday),” said Lynch, referring to a wedding party who will occupy the downstairs lower level hotel rooms. “We’ll probably have a ribbon cutting ceremony about mid-December.”

He continued about the pleasure of finally completing the process, which involved heavy collaboration with the Mississippi Department of Archives and History to preserve the historical aspects of the building, including the skylight, high ceilings, hardwood floors and front entrance awning.

“It’s been a fun process and tiring to do it,” he said. “I’m happy about this part. We’re completely open for business now.”

Lynch explained one of the reasons the endeavor was begun by he and other investors – Jeff Doremus, Shannon Patterson, Richard Rushing and Steven Mills – was in an effort to keep local businesses thriving downtown.

“It can be hard for small businesses downtown to operate sometimes,” he said. “So it’s a way to bring out-of-towners to downtown to see all the other great things we have to offer. It’s going to be a great thing for Brookhaven.”

Brookhaven-Lincoln County Chamber of Commerce Executive Vice President Cliff Brumfield agreed that the new Inn should have an impact on the city.

“It brings an element of style,” he said. “It’s a unique venue for downtown. It should not only be very appreciated, but it’s unexpected to see something like this in a town our size.”

He said he hopes the Inn will bring out-of-towners as well, possibly even encouraging some Amtrak passengers to stop overnight to enjoy the hotel and the shopping downtown has to offer.

“We’re definitely fortunate to have local investors who saw value in putting this project together,” Brumfield continued. “Their commitment and belief in downtown is something everyone should be proud of.”

Indeed the Inn does bring a fresh look while maintaining the historic charm of which Brookhaven has always been known.

Surrounded by an appreciative and enlivened group of well-wishing citizens, Lynch said while he has enjoyed the experience and seeing the excitement and interest of the public, he has no immediate plans to take up another project.

“No plans for anything else, yet,” he said with a smile. “I’m pretty tired.”